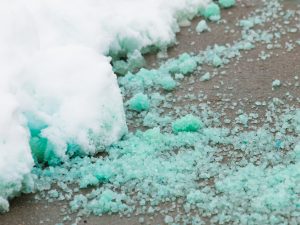 If you don’t check the packaging, not all ice melt can melt in freezing temperatures.  Rock salt won’t effectively melt the ice lower than 15 or even 20 degrees Fahrenheit.  That means if the outside temperature is 10 degrees, the rock salt will do little more than provide a bit of traction.  If you purchase an ice melt that is effective in extreme temperatures, like Blank Industries™’ Pro PowerMelt, or any ice melt using Breakthrough Infusion Technology™, you’ll be covered in almost all situations during the winter.

Pre-treating initially will melt snow on contact, so less snow will actually stick on the ground.  It also prevents ice and snow from bonding with the frozen pavement, which will help to prevent the incredibly treacherous black ice. The combination of those reasons will cause snow removal to be much easier once all the snow has fallen.

Not using enough ice melt will not thoroughly melt the ice.  Make sure to pay attention to packaging instructions, so that your driveways become thoroughly clear.

Although there is a wide range of how much can be used, using too much ice melt won’t help ice melt to be more effective.  People frequently learn to apply too much if they used the wrong ice melt in the past (see mistake #1).  Too much will leave excess ice melt at the end of the storm and uneven melting on the pavement.

Not to toot our own horn, but infused ice melt like Pro PowerMelt + with Breakthrough Infusion Technology™ can create a more effective, longer lasting ice melt that starts to work rapidly.  Our ice melt has a 2-stage melting process to bore holes into the ice and melt the ice by creating a brine. If you haven’t seen our infused ice melt up against the competition, make sure to check it out here, because trial after trial, ice melt with Breakthrough Infusion Technology™ beats out the competition in every category.  Infused ice melt is made through our own patent-pending manufacturing process that can only be found from Blank Industries™.

When it comes to ice melt, you might say we know what we’re doing.  Since our focus is on the most effective way to melt ice, we thought it important to share the top mistakes people make in applying ice melt, so that you can be informed with your ice melt purchases and get the best use from your ice melt.